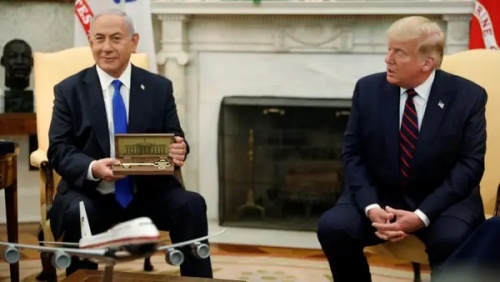 U.S. President Donald Trump speaks as he meets with Israel's Prime Minister Benjamin Netanyahu prior to signing the Abraham Accords.

Janomot report: More than 60 percent of Israelis believe a victory for Donald Trump in the US presidential election would be preferable for the Jewish state, an opinion poll indicated on Monday.

According to the poll, commissioned by the Jerusalem-based think-tank the Israel Democracy Institute (IDI), and released on the eve of the US vote, 63 percent of Israelis, including 70 percent of Jews, think a Trump win is in Israel’s interests.

However, only 17 percent of Israelis surveyed said US Democratic presidential nominee Joe Biden would be better for Israel, while 20 percent said they did not know.

“Presumably this pronounced preference among the Jewish public for Trump to keep serving stems to a large extent from the assessment that Biden’s election would weaken US-Israeli relations, and strengthen the relationship between Washington and the Palestinians,” IDI said.

Another poll in mid-October, carried out for the Tel Aviv-based i24 news TV channel, found that 63 percent of Israelis said Trump would be a more pro-Israeli president.
Trump has made several key decisions for the Jewish state during his tenure, including recognizing Jerusalem as Israel’s capital and Israeli sovereignty in the Syrian Golan Heights.

He has also backed normalization deals between Israel and Arab nations.

Prime Minister Benjamin Netanyahu has hailed Trump as Israel’s strongest ever ally in the White House.

But opposition leader Yair Lapid on Monday said that whoever wins, “the next president of the US will be a friend of Israel”.

“Both Donald Trump and Joe Biden are friends of Israel, with a deep commitment to Israel and to Zionism,” Lapid said in a statement, while adding he had seen hostile “radical voices” growing stronger within the Democratic Party.

Several rabbis, including Haim Druckman, an influential former member of the National Religious Party, have urged US citizens in Israel to vote for Trump.
And on Monday evening around 150 Trump supporters waving US and Israeli flags rallied in the city of Beit Shemesh south of Jerusalem, where many Israeli-Americans live.