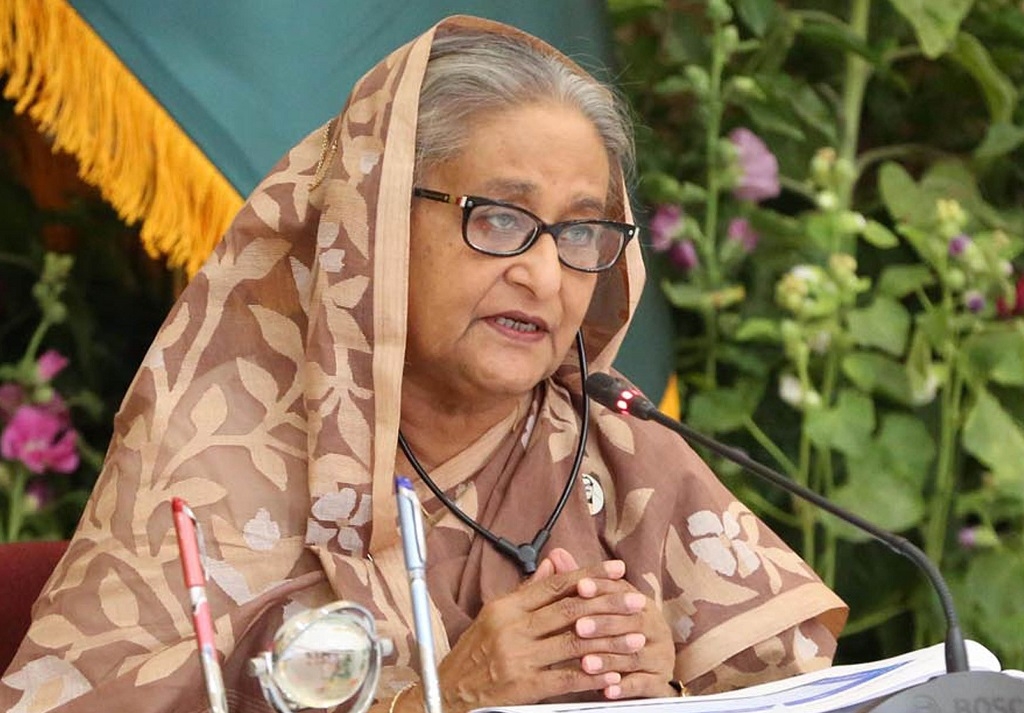 She also distributed the highest medals for peace time among the recipients among the armed forces members for 2020-21.
Liberation war affairs minister AKM Mozammel Haque, in favour of the prime minister, handed over the gifts and awards among the recipients.
Hasina said the prime aim of her government is to make the country a developed and prosperous Sonar Bangla (Golden Bengal). "We've been relentlessly working to materialise that as it was the dream of Father of the Nation Bangabandhu Sheikh Mujibur Rahman."
"The advancement of the country must not get stalled ...this is our vow on this year's Armed Forces Day," she insisted.
The prime minister said the government wants to elevate the institutions that are integrated with the country's independence like the Armed Forces to global standards through modern education and training.
"We also have to change the fate of the people of the country. So, we've taken massive programmes for the country's socioeconomic development so that the grassroots level people in rural areas can get the results of these developments," Hasina said.
Reaffirming that the government has taken programmes to develop all the institutions of the country, she said, "... Bangladesh now can step forward keeping pace with the world. Bangladesh attained that capability as we've to advance further what we've attained in lieu of the blood of millions of martyrs."
Regarding the tempering of the history of the independence, the prime minister said the history was distorted after the assassination of Father of the Nation Bangabandhu Sheikh Mujibur Rahman and his family members.
"At one point of time, the valiant freedom fighters were afraid of showing their identity; they could not even say they're freedom fighters," she said adding, the history of the independence was replaced with imaginary stories.
"I don't know whether there is any country in the world that tempers its own tales of victory like this, but this sort of heinous job has been done in our country," she said.
After returning to power in 1996, Hasina said, the then Awami League government started providing quotas for the freedom fighters and their family members.
"We've taken steps so that the lost glory of the freedom fighters could come back, wherever they live or which party they belong to. Freedom fighters are freedom fighters. They'll get the due honour as freedom fighters; we've taken that step," the PM reassured.
Hasina also described the long struggle and sacrifices of Father of the Nation Bangabandhu Sheikh Mujibur Rahman as well as leaders and workers of Awami League for the cause of independence.
The prime minister elaborated various measures of her government for the modernisation and development of the Armed Forces, and said, it is implementing the forces goal 2030 formulated in light of the defence policy of Father of the Nation.
Principal Staff Officer of the Armed Forces Division lieutenant general Waker-Uz-Zaman delivered the welcome speech.
PM's security affairs adviser major general (retd) Tarique Ahmed Siddique was present at Ganobhaban end while Chief of Army Staff general SM Shafiuddin Ahmed, Chief of Naval Staff admiral M Shaheen Iqbal, Chief of Air Staff air chief marshal Shaikh Abdul Hannan were present at the cantonment end.