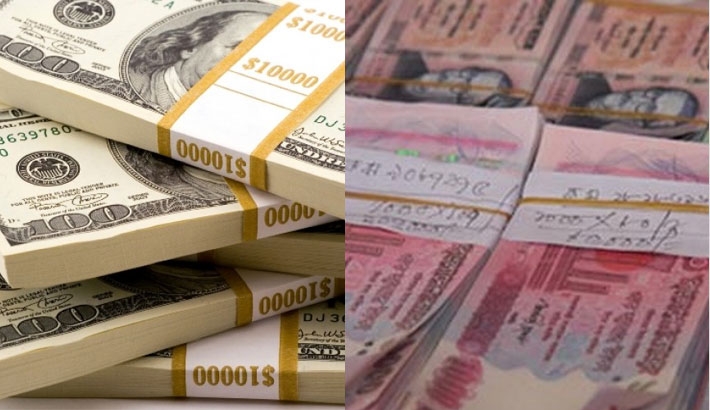 Bangladesh has continued depreciating taka against the US dollar at a similar pace with other countries while the central bank is frequently selling dollars from the forex reserve to pay the import costs.
In the aftermath, the dollar price in phases jumped by Tk 0.7 in the last one and a half months and stood at Tk 86.7 on Monday.
But the banks are charging importers Tk 92 to Tk 93 for each dollar, which is eventually pulling up the consumer product price.
The Bangladesh Bank has recently scaled up the cash margin for opening letter of credit (LC) in an effort to discourage imports and put a brake on dollar spending.

The step has been taken as the country, with its current forex reserve, is likely to face a shortfall to pay the import costs for the next six months.
Despite having no connection with the banking channel, the local kerb market took a hit and saw the exchange rate crossing Tk 93 on Wednesday.
Experts say the open currency market is going through an increased demand for dollars thanks to frequent foreign trips in the improved pandemic situation.
But the country witnessed a significant fall in the number of inbound tourists, which slowed down the dollar inflow and swelled the exchange rate.
Attributing the high dollar price in the banking channel to increased import costs, the industry insiders underscored the need for taking initiative to shoot up export and remittance income.
Besides, the open market should be monitored strictly so that no one can take a higher amount of cash dollar abroad, they added.
The cost of imports has increased about 46 per cent in July-March period, due to increase in shipping cost and commodity prices in the global market.
On the other hand, the export income rose by 33 per cent while inward remittance fell by 17 per cent comparing to the previous year. In addition, there are huge overseas debt liabilities in the public and private sector. The country is spending $2 billion more than its income each month. The dollar price, in the consequence, has been on the rise in the local market.
According to the Bangladesh Bank, each dollar changed hands for Tk 86 in the banking channel on 22 March. After repeated devaluation of taka, the exchange rate was revised and set at Tk 86.7 on Monday.
But the importers are paying Tk 92 to Tk 93 to banks for each dollar. There are even reports of paying Tk 95. However, the banks’ price charts do not contain the prevailing market price.
The declared exchange rate was Tk 86.75 at the Agrani Bank and Eastern Bank on Wednesday.
The chairman of Chittagong Chamber of Commerce and Industry and M Alam Group, Mahbubul Alam, told Prothom Alo, “The price soared, so did the shipping cost. On the other hand, we are paying Tk 95 for each dollar. The price gap of dollar unprecedentedly rose to Tk 8. But the commodity price cannot be hiked in line with the spending.”
He placed a demand to fix a uniform dollar exchange rate for the essential goods importers, noting that the traders are not taking a risk to import commodities in such a volatile dollar market.
Meanwhile, the insiders alleged that there is no mechanism to monitor the open currency market. Many people are collecting a hefty amount of greenback and going abroad, but the same amount is not being received here. This is the major reason behind the crisis as the only source of the currency is cash dollar brought in by the inbound travellers.
The central bank allowed Standard Chartered to bring foreign currency worth $5 million (50 lakh) to combat the dollar crisis in 2017. But the bank then refrained from importing the currency due to the existing 37 per cent duty.
The bank, for the last time, had brought foreign currency worth $4 million (40 lakh) in 2011.
The central bank is continuously selling dollars from its forex reserve to tackle the prevailing market crisis. As a result, thecountry’s strong foreign currency base is falling gradually.
The Bangladesh Bank sold out $20.1 million (2.1 crore) on Wednesday, raising the total amount of dollars sold in the current fiscal to more than 5 billion (500 crore).
The country’s forex reserve, which was recorded at $46 billion (4,600 crore) in December, declined to $41.95 billion (4,195 crore) in the previous month, thanks to the selling spree of dollar and payment of import costs to the Asian Clearing Union (ACU).
Meantime, the banks deposited Tk 400 billion (40,000 crore) to the Bangladesh Bank to buy dollars in the current fiscal, which brought the excess liquidity under control. The surplus liquidity plunged to Tk 1.98 trillion (1.98 lakh crore) in March. However, the current amount of idle money is Tk 300 billion (30,000 crore).
Dhaka Bank managing director Emranul Haque said the import cost went up due to the Russia-Ukraine war and holy Ramadan. At the same time, the process of paying due import liabilities has started, which pushed up the dollar exchange rate.
“Now it needs to increase surveillance on export and overseas income and gear up efforts to prevent the hundi system. Then the market would be stable. We are selling dollars at the price we are receiving. We are not making any profit,” he said.
The central bank is setting the exchange rate by selling dollars. But the economists are against holding back the US dollar, rather they support leaving the price on the prevailing market as it would increase export and remittance income.

However, Bangladesh Bank officials warned that the country would see an increased inflation due to the high exchange rate brought in by higher import spending than the export income. It will have a negative impact on the whole country.

The central bank started discouraging the import of luxury products due to rising dollar price and falling forex reserve. To execute the plan, it increased the cash margin for opening LCs for the import of luxury cars and electronic products.
In a gazette notification, the Bangladesh Bank said the cash margin was revised to consolidate the local currency and debt management due to the turmoil in the global economic arena.
The importers now have to maintain a 75 per cent cash margin while opening LCs to import luxury cars and electronic home appliances.
The Dhaka Bank MD said the central bank’s initiative will reduce import of unnecessary products. No one will keep luxury vehicles in depots for long after import. It will reduce the pressure on imports and stabilize the dollar market.
However, some others vented suspicion about the aftermath of the initiative. The managing director of Community Bank, Masihul Huq Chowdhury, wrote in a social media post, “Will the notification serve the genuine purpose? If the cash margin is even made 100 per cent, it would be deposited in local currency. Then how would it save the foreign currency?”