We are in 'heaven' in comparison to other countries: Momen 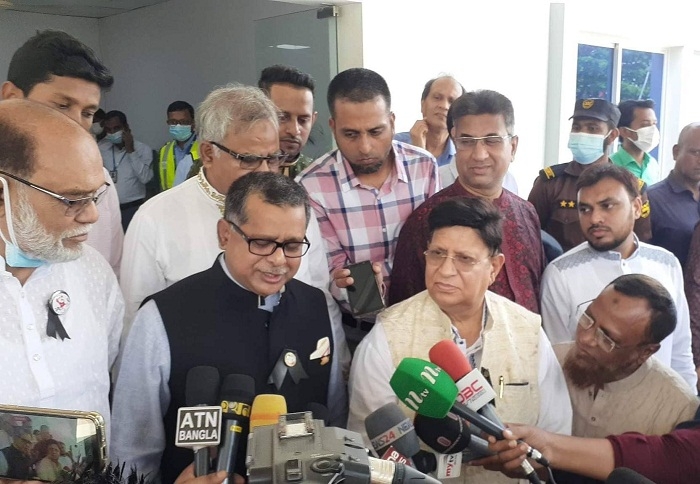 Foreign minister AK Abdul Momen has commented that the people of Bangladesh are in heaven-like situation compared to other countries amid the global recession.

The minister said this in response to reporters' questions at around 12.00pm on Friday, following a meeting related to the land acquisition of Sylhet Osmani International Airport expansion project.

While comparing the happiness of Bangladeshi people with other countries under the current global situation, Abdul Momen said, “Bangladesh will turn into Sri Lanka, such rumors are being spread by a group of people to create panic. Actuality, these are baseless."

When asked whether information about the deposit of Bangladeshis in Swiss banks will be sought, the minister said whenever information is sought from the countries where money is siphoned off from Bangladesh, they do not want to comply with. This is a serious problem, he added.

The finance ministry and the Bangladesh Bank had sent letters to Swiss banks seeking information about 67 specific persons in the past. They provided information only about only one person then. Though information was requested several more times, their ambassador denied that.

Mentioning that ‘Switzerland is a friend to Bangladesh’, the minister urged not to distort information. He also claimed the Swiss ambassador’s statement is not correct.

Prior to that, top executives of the administration including state minister for civil aviation and tourism M Mahbub Ali and civil aviation secretary Md Mokammel Hossain along with Awami League leaders took part in the meeting.

After the meeting, M Mahbub Ali, state minister for civil aviation and tourism told the reporters, direct flights will be operating between Sylhet and New York in future.

Sylhet Osmani International Airport is being developed to be used as a regional hub as per the prime minister’s direction. The extension work of the runway and construction of new terminal building is going on, he added.