Prices of commodities will not rise during Ramadan: Businessmen 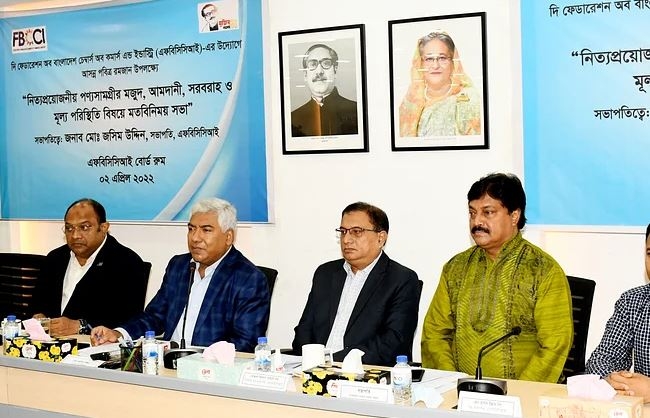 Janomot Desk: The businessmen gave such assurance at a meeting organized by the Federation of Bangladesh Chambers of Commerce and Industry (FBCCI) on Saturday held at FBCCI Icon in the capital.

The participants at the meeting also opined that there is no scope for price hike of essential commodities during the month of Ramadan.

While presiding over the meeting, FBCCI president Md Jashim Uddin said the FBCCI has formed a 46-member market monitoring committee to keep the market stable during Ramadan while the committee will monitor whether 46 products are being sold at the prices fixed by the government.
He informed that the committee members will also collect and review the market prices of essential commodities, supply situation, production and international market prices and pay spot visits to the market.

Jashim said besides the government, businessmen also have responsibilities to control the market.

"During any festival, most countries of the world reduce the price of their products. But, prices go up in Bangladesh during festivals, particularly during Ramadan. Why? We have to change this culture here," he added.

Stating that the prices of various raw materials and commodities have gone up in the world market, the FBCCI president also demanded of the government to adjust tax and duties.

“Reducing duty and tax rates will not affect the government's revenue collection, as the prices and shipment costs are high, rather tax adjustment will provide relief to the consumers,” the president added.

Jashim said that the FBCCI has written a letter to Bangladesh Bank to increase the existing working capital loan limit by at least 40 percent.

The president of the country’s apex trade body said that the FBCCI has formed a "monitoring cell" with businesses engaged in different sectors across the country to monitor the essentials market during Ramadan for controlling prices.

Bangladesh Dal Babosayee Somity President Shafi Mahmud said they would try to reduce lentil price by Taka 2 to 4 per kg adding that its price would not increase during the Ramadan as there is sufficient stock.

Director of City group and president of the Bangladesh Oil Mills Association Biswajit Saha said that there is no chance to stockpile edible oil as they have to deliver the product within 15 days of the issuance of sales order.

Director of Finance and Operations of TK Group Shafiul Taslim said that the whole business community has to take responsibility for the market manipulation of a few unscrupulous businessmen.